Is LFI doing a How to Vote Guide?

I wish we had a $100 donation for every time I’ve been asked that question. Unfortunately I think the guide we’ve published for probably close to 20 years has outgrown it’s usefulness. Why I hear you ask?

The state of politics in this country, as with much of the Western world is in a parlous state to say the least. For more than 20 years we’ve warned that Catholics and people of goodwill should not, no, cannot, vote for the Labor Party because of their commitment to abortion which can be found in their Party Platform since 1980! In fact we took out advertisements in major daily newspapers in major cities around the country in the late 1990’s and early 2000’s saying exactly that. We received plenty of backlash for saying so, but I think time has proved us right. Now you can include compulsory support for “same sex marriage” in their platform also!

It’s kind of amusing, if it weren’t so serious, that it needs to be explained to many daily Mass going Catholics, who have always supported Labor because their father and his father etc. did so. If we said the same thing about the Greens who have similar things in their Party Platform everyone would wisely nod in agreement. Usually when any objection was made to our position the most common defence was “the other mob aren’t any better.” Well they don’t have those things in their Party’s Platform for a start. Still don’t. However, recent events have seen me more and more disillusioned with the other mob!

Both the Liberals and Nationals have effectively disenfranchised their traditional supporters in their quest for “popularity” and positive headlines in the mainstream media. On top of this the many scandals that have left the coalition reeling in the last couple of years says much about the political “culture.” This breach of trust has seen them lose grass root members to the newly formed Australian Conservatives (AC) especially and to the Christian Democratic Party (CDP). Generally those who support the Democratic Labor Party (DLP) are the disenfranchised Labor Party supporters.

I seriously find myself unable to endorse the coalition parties anymore. I know, there are some good members in the State and Federal branches of the Liberals and Nationals and if I was in their electorates I would feel I could vote for them and I encourage anyone who is in those electorates to do just that. But, those numbers are becoming smaller each cycle. I seriously considered asking Barnaby Joyce to speak at a dinner/fundraiser not long ago! For whatever prevented that I thank God and I know you’ll say he’s only human and we all make mistakes etc. and that he did the right thing keeping the baby and that is true. But…

That leaves the above mentioned AC, CDP and DLP and any “good” independents that might be around. One Nation and United Australia Party may have some positive aspects but are basically a shambles and are light on when it comes to the serious moral issues.

So, given that our voters’ guide was basically a look at the history of sitting members and a summary of the Party policies for other candidates and given that the history depends on there being a moral issue before the Parliament that shows the way they voted and we have had some major issues (“Same sex Marriage” Federally and “Safe Access” Zones in NSW) where the way members in both the NSW State Parliament and our current Federal Parliament are well known or easily determined, I don’t think the time and expense in researching and publishing the Voters’ Guides is justified.
There are some projects we are working on which we will make public as we go that have taken a lot of our time and energy more recently. One is the Convention on the Rights of the Family and there is an article in this edition of Lifelines outlining why such a document is needed. I have been asked to participate in the draft document working group which I am happy to do. There will be more on this soon. Another project we are beginning is to reinvigorate Courage and Encourage. I have spent some time in discussions with James Parker on this front and since LFI (Then known as HLI) was instrumental in bringing Courage to Australia it seems only right we should be, at this critical time, trying to build it up and make it something more accessible to those with same sex attraction seeking assistance.

A leaked Labor Party election flyer listed as one of its policies that ‘NSW Labor will task the Law Reform Commission to decriminalise abortion in NSW’. Recognising that this was an electoral error, the Labor leader, Luke Foley, advised that Labor simply wanted to review the laws and would ask the Law Reform Commission to conduct an inquiry and present options and recommendations to Parliament. Such a correction cannot hide the clear commitment that Labor has to profoundly liberalising abortion laws.

Even if the Coalition is re-elected it is likely these amendments will be introduced. There are now many pro-abortion politicians in the Liberal and National Parties. This was evidenced by the recent introduction of a law prohibiting communications that are reasonably likely to cause distress or anxiety within 150 metres of abortion clinics. This law not only prohibits protests but even respectful offers of assistance to women in need. A prohibition that is particularly unjust considering the evidence of many women around the world that they have been helped by those offering assistance outside clinics.

The amendments will likely follow the Victorian Abortion Law Reform Act 2008. Under this Act, a medical practitioner may perform an abortion on a woman who is not more than 24 weeks pregnant with her consent without needing to satisfy any additional requirement. If after 24 weeks the abortion may still be performed if the medical practitioner ‘reasonably believes that the abortion is appropriate in all the circumstances’ and they have consulted another medical practitioner who also has that belief. There are no penalties specified in the Act for failing to consult another medical practitioner. There is also no recognition of the gravity of the procedure. Although NSW laws are far from a pro-life ideal they at least provide some recognition of the seriousness of abortion and require that the health risks faced by the woman are of such significance that an abortion is a proportionate response.

A further problem with the Act is that health professionals with a conscientious objection must advise that they have a conscientious objection and refer the woman seeking abortion services to a health practitioner who does not have a conscientious objection. This requirement is widely regarded as inappropriate for forcing a health practitioner to be complicit in an act they consider to be gravely immoral. The inappropriateness of the law is reinforced considering the ease with which a woman could independently locate a health professional who would be willing to provide abortion services. Of even greater concern is the requirement that health professionals must participate in an abortion procedure if ‘necessary to preserve the life of the pregnant woman’. A pro-life health professional will do everything they reasonably can to preserve a woman’s life but to expect them to participate in an abortion when they recognise that it involves the killing of a child is something that they obviously cannot accept.

The NSW laws on abortion are far from ideal but the introduction of Victorian style abortion laws will be vastly worse ending the lives of children, harming women and causing some of the most intelligent and caring individuals in society to abandon the health professions.

Pro-life voters should ensure that in the upcoming election they cast their vote for Australian Conservatives, Christian Democratic and other political candidates who are dedicated to ensuring that such laws are not introduced into New South Wales. 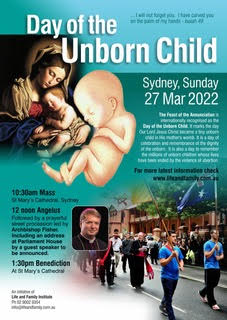